BAD DEAL: The Case Against the 2022 SEBAC Agreements

Governor Ned Lamont, on April 1, asked state lawmakers to ratify tentative agreements with 15 state government unions that negotiated under a single banner—the State Employee Bargaining Agent Coalition, or SEBAC. These unions represent the bulk of the state workforce. State senators and representatives in coming weeks will be asked to cast a single up-or-down vote on whether to bind state government to the terms, detailed in more than 1,700 pages, until 2025.

The agreements call for a pair of bonuses totaling $3,500 for full-time employees and up to two retroactive raises, to be followed by up to two raises each in July 2022 and July 2023. For some employee groups, salaries would climb 21 percent over the next 15 months. Recent retirees would have their pensions retroactively increased based on what their final pay would have been. Limited data shared by the Lamont administration show the deal would add well over $1 billion to state costs in the first 27 months alone.

Negotiations appear to have had no impact on state healthcare coverage or pension contributions, leaving untouched a benefit package that far exceeds what is commonly found in Connecticut’s private sector. Read more here… 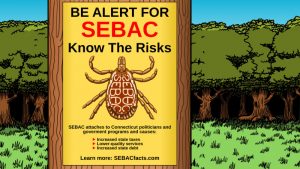